The boy fell again and has two loose front teeth.  Thank God we did not have him first or we have never had another... Basically, he fell off the rocking chair... rocking back and forth, back and forth, and, I think as I don't have eyes on the back of my head, he stood up and fell off.  Damn gravity.
The upper lip swelled up to an enormous size and the scab above his two front teeth could gag a maggot.  It all happened last Thursday and now he is A LOT better.  The upper gums need to look like the lower gums for him to be healed.  The dentist told us to give him baby foods... nothing he needs to bite.  So hard for Ryan... he hates things cut up for him and tells me often, "I don't like it!"  Tough situation but he won't starve.
The other night when it was so warm and he was soooo tired he grabbed his blanket, I grabbed some pillows and we lounged in the backyard grass.  He soon fell asleep.  Such a little angel... yet a daredevil in disguise. 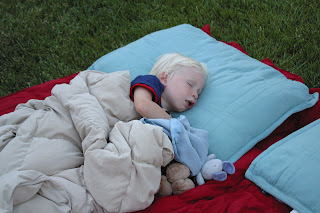