The children really like corn dogs.  Who doesn't like food on a stick?  Trader Joe's has a frozen corn dog that is made from tofu.  It'll do in a pinch but I kept thinking there has to be something better as I'm not the biggest fan of processed soy products.  Of course, I thought there has to be a way to make this myself.  Most of the recipes out there call for frying the hot dogs once they're covered in batter.  1. I don't own a deep fryer and, 2. honestly, I'm looking for something a bit healthier.  I did find a baked corn dog recipe but the reviews weren't all that great as the corn dog came out like a triangular shaped mess.

After mostly giving up, I finally found something that seemed totally doable.  Corn dog muffins!  Basically the recipe cuts hot dogs into thirds, puts them into cornbread batter and then bakes them.  C'mon, that sounds easy, pretty much it does the same thing and I can control the ingredients. 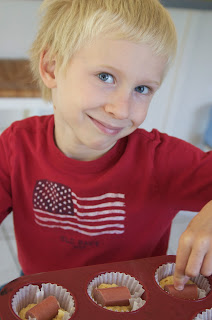 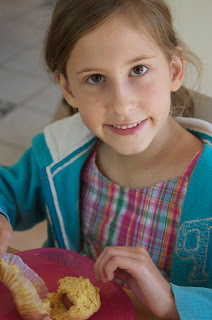 The only thing missing... no stick. I'm sure you could fiddle around with mini muffins and pop a stick on them if you really needed to fulfill your food on a stick addiction.  The children really enjoyed them (me too!) and that's all that matters.  We had them for lunch served with a berry smoothie that Ashleigh made. 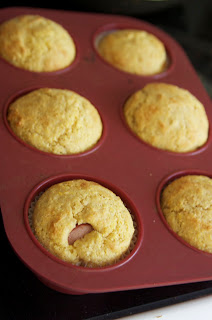 I used a corn bread recipe that we use all the time for dinners.  The recipe doesn't use a crazy processed oil instead it calls for butter.  Yum, real butter.  Also, I substituted whole wheat flour for the white flour.  The flavor isn't very sweet so it's more cornbread than sweet corn cake.  Also, I used Applegate organic hot dogs that Trader Joe's sells now.  I cut them into thirds, baked them for about 12 minutes or so and made a dozen corn dog muffins.

Also, I'm participating in a Pinterest IRL Link Up (thanks, Lizz!).  I'm not going into Pinterest here but once you start, you can't stop.  I found the corn dog muffin recipe on Pinterest and now I've made something from something I pinned! Labels: 3 votes a day, Get in my belly